PLS GUYS WE REALLY NEED AT LEAST ONE SERVER LIKE THIS.
IM SURE IT COULD BE REALLY INTERESTING.

What about partial? Just so it works kind of.

I remember an existing BR mod on player limit 32

There have been mods in that realm. Last Man Standing for example. A great many things are possible to make a pretty good BR cod4 mod. But many things are not or will have limitations. There also arent enough big maps to support 32 players.

However, here in 2022 there really is no reason to put in the huge effort to make one. Not nearly enough player traffic to support it. Hard enough to get 32 players for any cod4 server. Only a few come to mind. But if someone wants to pay a modder to make it, well, I am sure there are a few out there that could negotiate a price.

Check the Last Man Standing gametype from Frontlines, it was the first ever Battle Royale in Call of Duty.

Or, if you want to keep it simple, check out the Open Warfare version of it from long long ago. It also has last ‘team’ standing if you want to try it out.

found this. i suggest paying around $5 a month on a vps from ovh 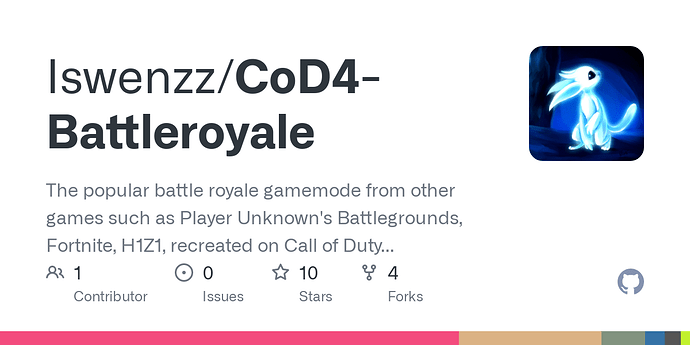 The popular battle royale gamemode from other games such as Player Unknown's Battlegrounds, Fortnite, H1Z1, recreated on Call of Duty 4! - GitHub - Iswenzz/CoD4-Battleroyale: The popular battle...